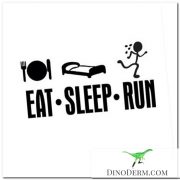 Running is one of the best forms of exercise. It is a holistic workout but it is not without its share of risks. Runners are vulnerable to various types of injury. Here are the five most common injuries runners or joggers are likely to encounter.